Welcome to the Rock! – Pebble Creek Ski Resort That Is

For me, hearing about a place prior of visiting makes my personal experience that much sweeter. It creates a certain mystique or legend inside my head, encouraging me to look for things that others may miss. This was certainly the case for Pebble Creek Ski Resort and the city of Pocatello. Reading about it in a few blogs and ski magazines, this place seemed like a unicorn. Low-cost lift tickets, two-dollar beers at the resort, great access to backcountry and terrain that was challenging? How could this still exist in North America? I couldn’t wait to see it in person. 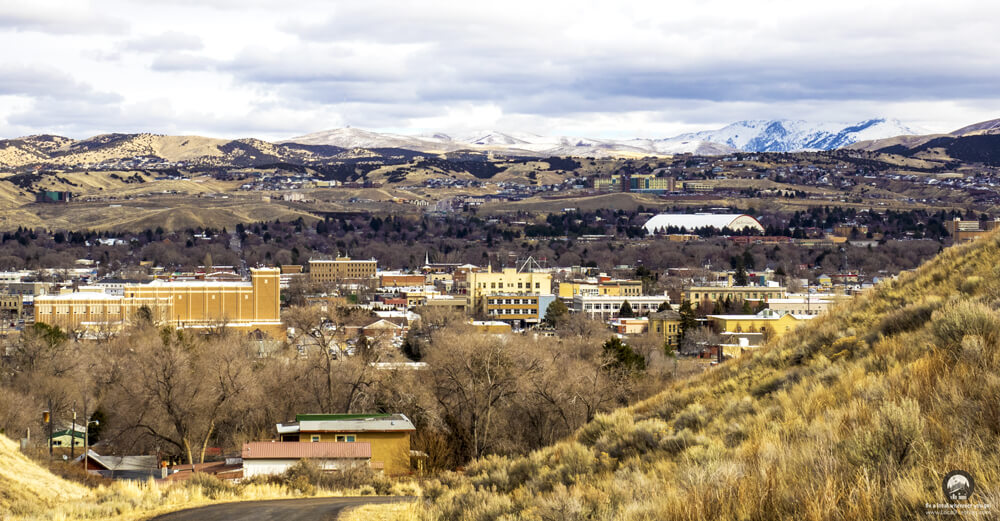 A Ski Town with a college problem or the other way around? Image by: Local Freshies

As we drove out of Twin Falls, the wide-open plains quickly were replaced with massive snow-covered peaks. Arriving to Pocatello a bit earlier than planned, we had some time to explore before dinner. As we drove through the center of town, we were greeted to well-kept historic neighborhoods filled with tree-lined streets, a quaint downtown, easy access to outdoor activities and a university. It reminded us of an affordable Boulder. How many ski-towns exist that are college towns? Not many. 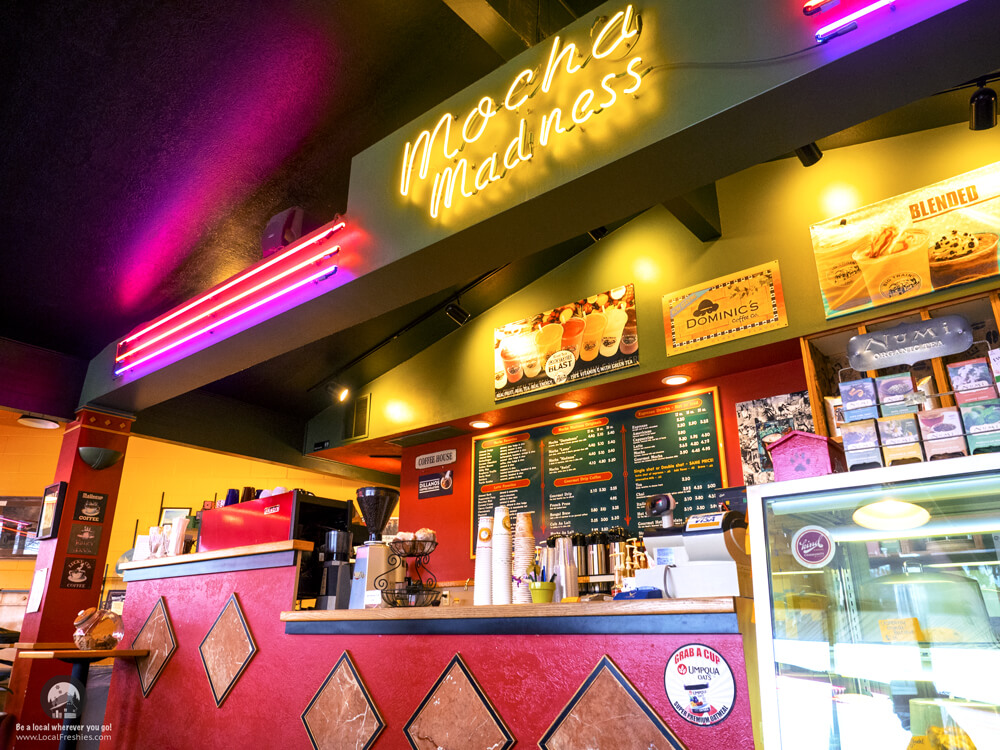 Venturing through the historic district, an adorable café appears called Mocha Madness. Festooned with neon lights, it reminds us of a 50’s diner. Why not grab a coffee? As we stepped into the cafe, hip hop bumped quietly in the background as we looked over the menu. The barista could tell we weren’t from around here. “You want to try a Mocha Madness Original?” Always taking the local recommendations, we ordered two of them. Taking a sip, it’s thick and creamy almost like a hot cocoa but with a slight tinge of coffee flavor. We come to find out that it’s made with the local dairy’s chocolate milk. This was not an ordinary coffee, mind you. It also contains potato flakes making it naturally creamier and richer than you’d find anywhere else. While sipping our coffees, darkness descends and our grumbling stomachs remind us it’s time to head to dinner.

Best Sushi Ever In The Rockies? Shockingly Yes!

We know what you’re thinking. “Sushi, in the Rockies?” You bet ‘cha! We’d read this was considered one of the best restaurants in all of Idaho. So, it was on our must-do list while in the Gem State. Daniel Russo, owner and head chef, grew up near Grand Targhee but like all great artists in the food world, he became a road scholar and sushi was his passion. From stints in Washington DC, California and trips to Japan, his exposure to all things sushi was vast. 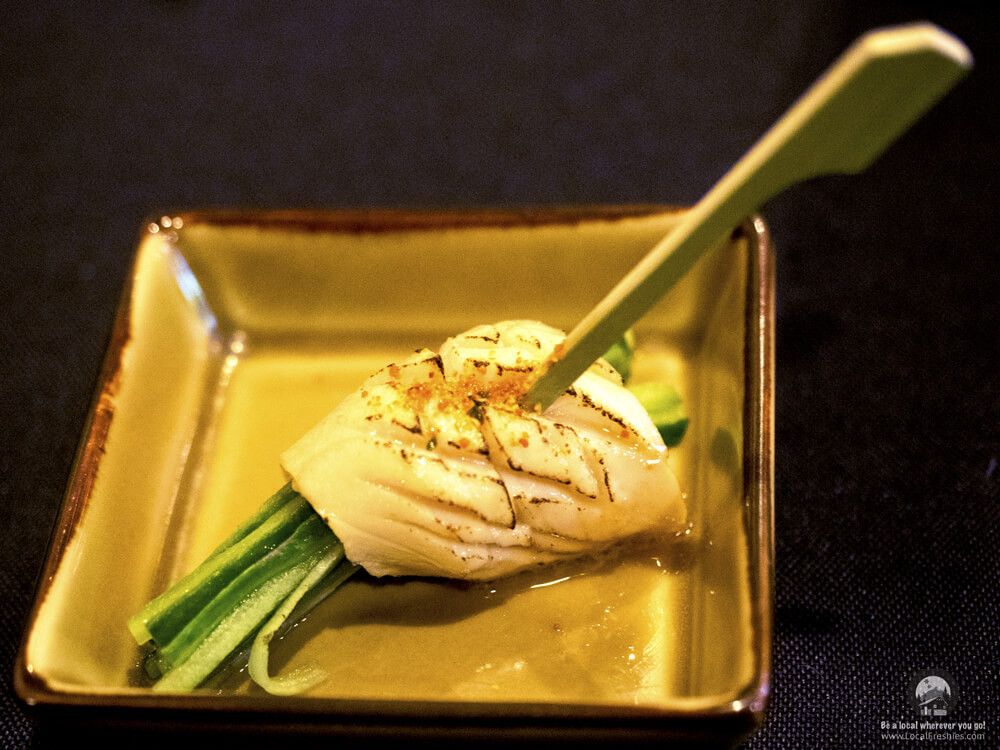 The meal started with two styles of edamame. One with garlic, salt, and butter while the other seasoned with Togarashi or Japanese 7 spice. The dressing of the soybeans added a whole different flavor that I’ve never had before. It’s a perfect way to start our culinary adventure. From there, we jumped into Escolar wrapped around cucumber. This dense fish has a buttery, flaky taste. Each course of sushi continued to blow our minds. The “Tiny Dancer” which is the most popular roll, lived up to its fame. Warm, crunchy & spicy from the fresh wasabi carefully placed on top of each piece. 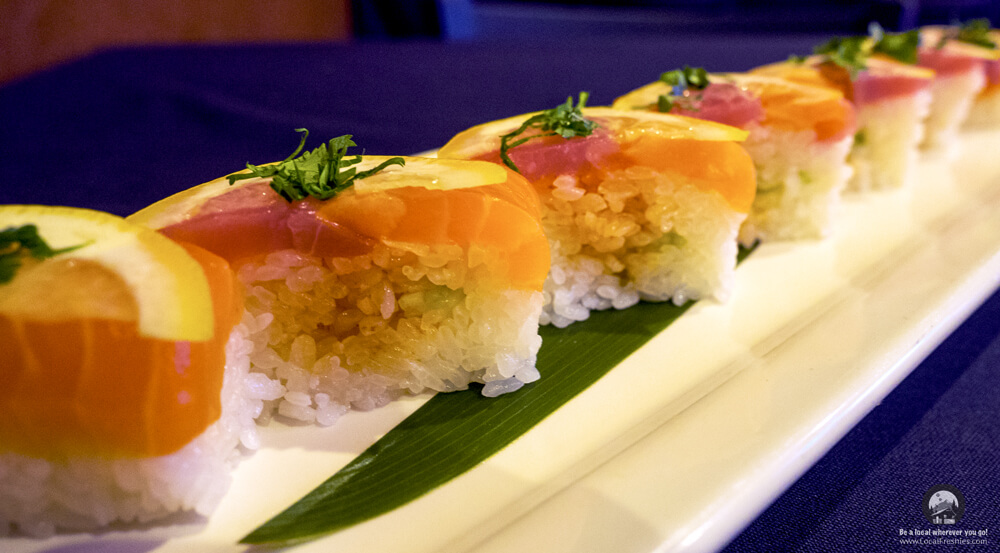 The clear winner though was the “Dozo-Domo” which loosely translates to chef’s choice. A sushi roll tailored specifically to your liking. For us, Daniel chose an Oshizushi which is made by pressing blocks of rice and sushi toppings into a special mold (called an ‘oshibako’) that creates perfect rectangles, then sliced and served. Talk about a mind-blowing experience. If you’re anywhere near Pocatello, we suggest making a pit-stop here. You won’t be disappointed. With our stomachs full and souls re-energized, it was time to head to bed. 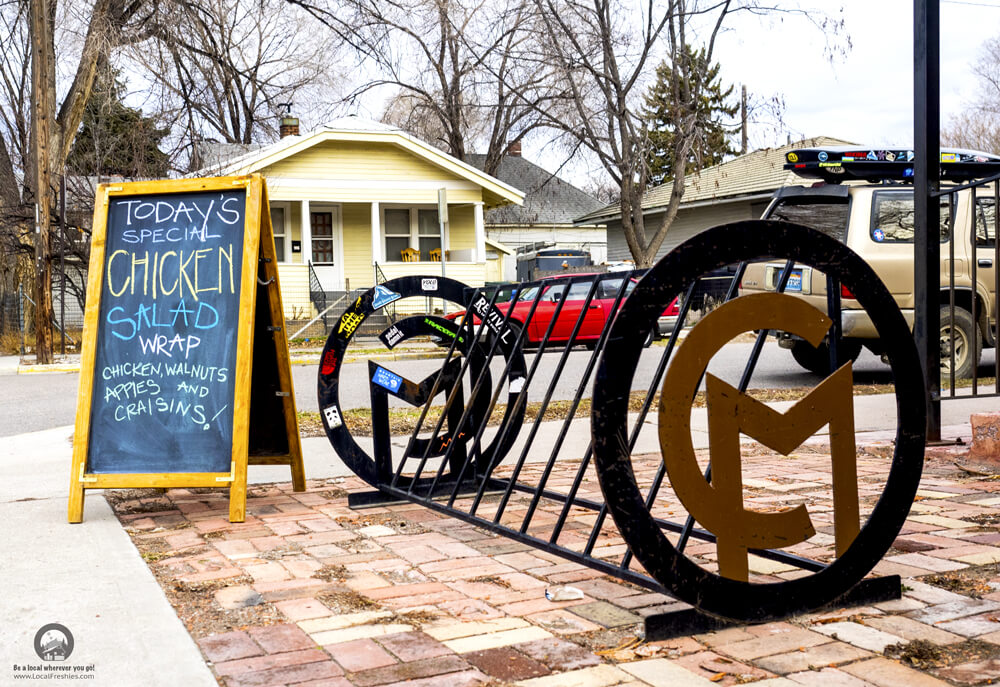 After a restful night, we woke up early the next day ready to get first chair. But first things first… breakfast. Only a block down from where we were staying was the College Market. Another adorable café that would be somewhere I’d camp out and work from if I lived here. It has lots of room with a just enough lived in feel to make it relaxing. Today though, we just ordered some coffee and grab breakfast paninis to go. First off, the Southern Pecan Coffee from the local micro-roaster Bills Beans was off the charts. The flavored roast tasted like I was drinkin’ a pecan pie. Second, the breakfast paninis made from scratch with fresh herbs are scrumptious. Wow! What a great way to start the day.

Welcome to the Rock! 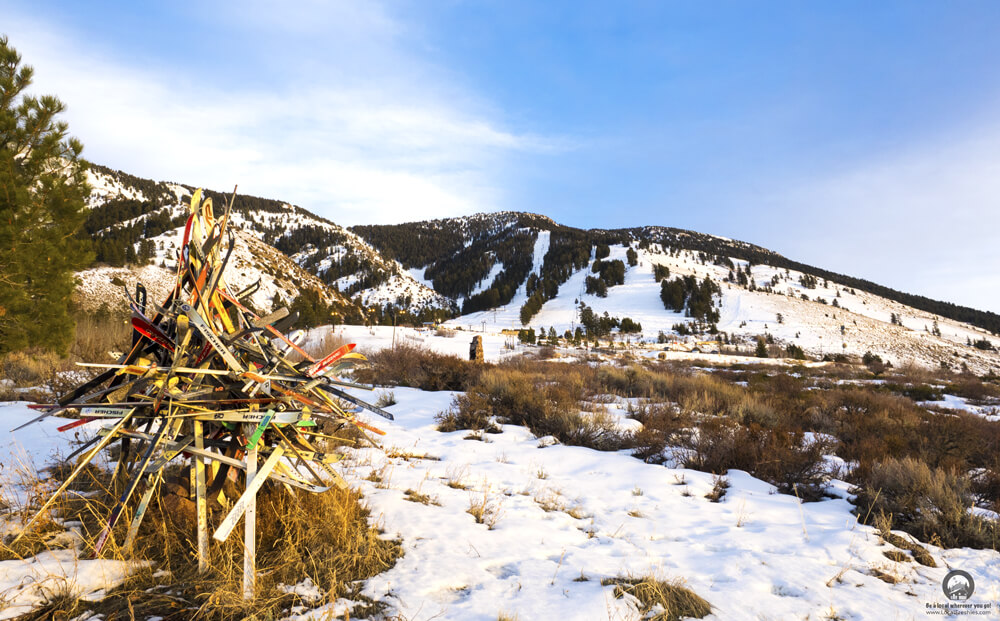 Welcome to the Rock! Image by: Local Freshies

After filling up the gas tank, we hopped on the expressway and headed to Pebble. With only a ten-minute drive, we exited the interstate and meandered our way towards the resort. Located in a massive valley, the resort’s face can be easily seen miles away. It isn’t until you make the final turn that you realize how serious the terrain really is. Big, rocky, and most of all steep. Cliff bands, chutes and sweeping trails drop down its front face inviting you to try and ski it if you can. A true playground for any serious skier or snowboarder. I now understand why the nickname for Pebble Creek is “The Rock”.

It’s a Thursday and the parking lot is full… of kids. Hundreds of them. We meet with our hosts for our stay: Mary Reichman, Mike Dixon and Mike Rodriguez. The first question out of our mouths is what’s up with all the young’uns? Even though there’s a ton of steep terrain, the goal at Pebble Creek is to get every kid in the area on the slopes. So, each day of the week, hundreds of students from schools in the region come up and shred as part of their PE credits. In addition, they make sure its affordable too! For $12/day, these lucky kids can get out on the slopes. What a novel concept! Instead of giving the money to shareholders, Pebble’s trying to help the community by offering an outlet during the cold winter days. 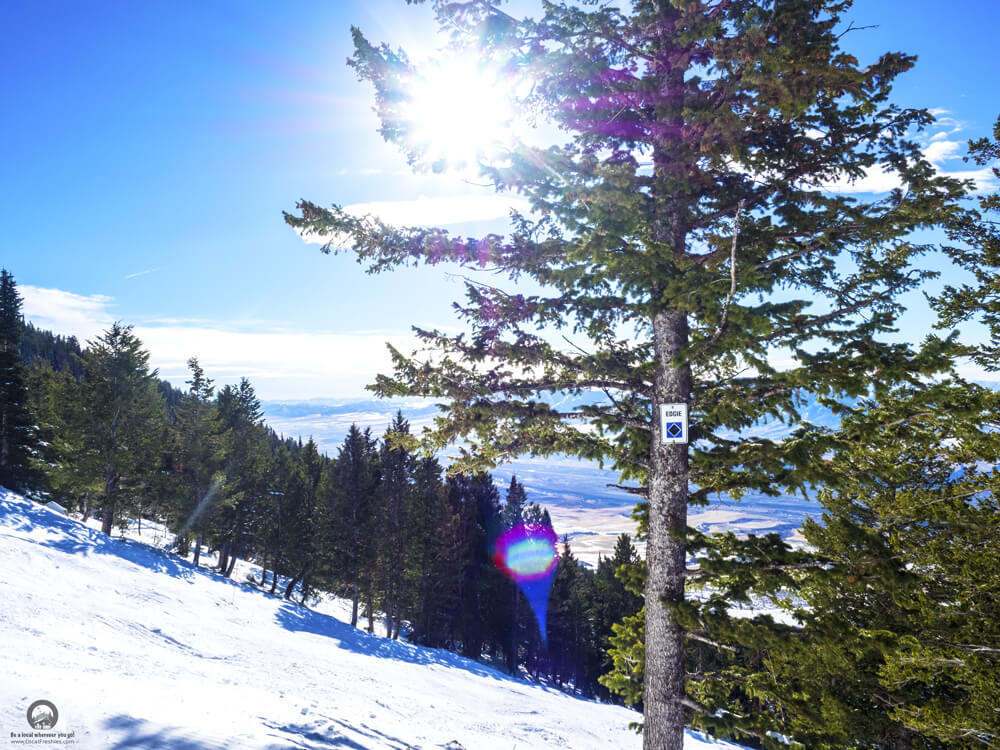 One half of the Edgie-Wedgie Combo Image by: Local Freshies

Mary no longer hits the slopes so Mike & Mike head out with us. Today’s goal is to give us a tour of the mountain. We hop onto the main lift and head up. Looking around, the opportunities are endless. Right underneath the lift are massive moguls surrounded by rocks, stumps and other natural debris. Not a run for the faint-hearted. And then… suddenly over the horizon, a school of children appear. Flying down the trail, they hop over the obstacles, make perfectly arced turns and disappear as quickly as they came. We ask Mike Dixon is this normal? He nods. There must be something in the terrain because these young kids rip!

At the top, we head skiers left to the outskirts and hit Outback. While traversing over, we pass two trail signs that call out Edgie and Wedgie. Mary tells us later that day these two runs are named after the children’s ski tool called the “Edgie-Wedgie.” A short piece of rubber tubing that clamps to each ski tip, this little tool makes sure the kid’s skis are in a safe position. Getting a quick glimpse at both these runs, I’m guessing you’d need to graduate from them before you’d hit either slope. 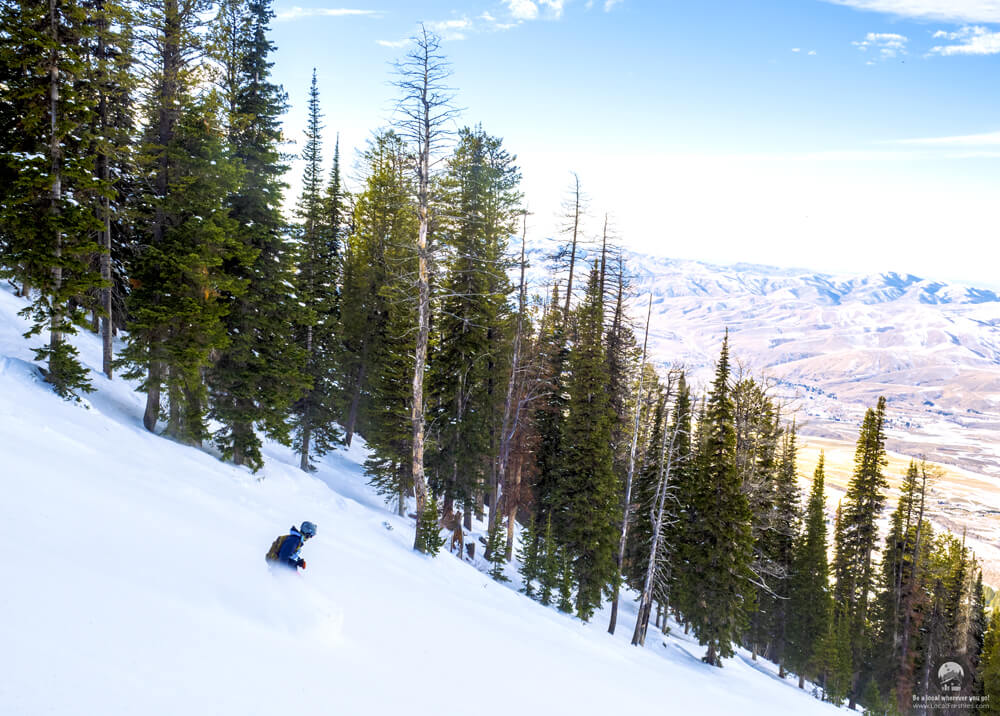 The snow is soft & creamy Image by: Local Freshies

Dropping down onto Outback, the snow is fantastic. Soft, creamy and effortlessly carveable. We take huge arcs through the snow enjoying each turn. As the trees part in front of us, we’re given the million-dollar view of the Portneuf Valley. The scenery is breathtaking. In the distance, Mike Dixon points out Scout Mountain, a popular zone known for mountain biking in the summer and backcountry skiing in the winter. He notes that the skiing might be great in the winter but the area really lends itself to mountain biking in the summer. From Pocatello alone, you can access 52 miles of single track that literally connects to everything around including that peak. Wow! 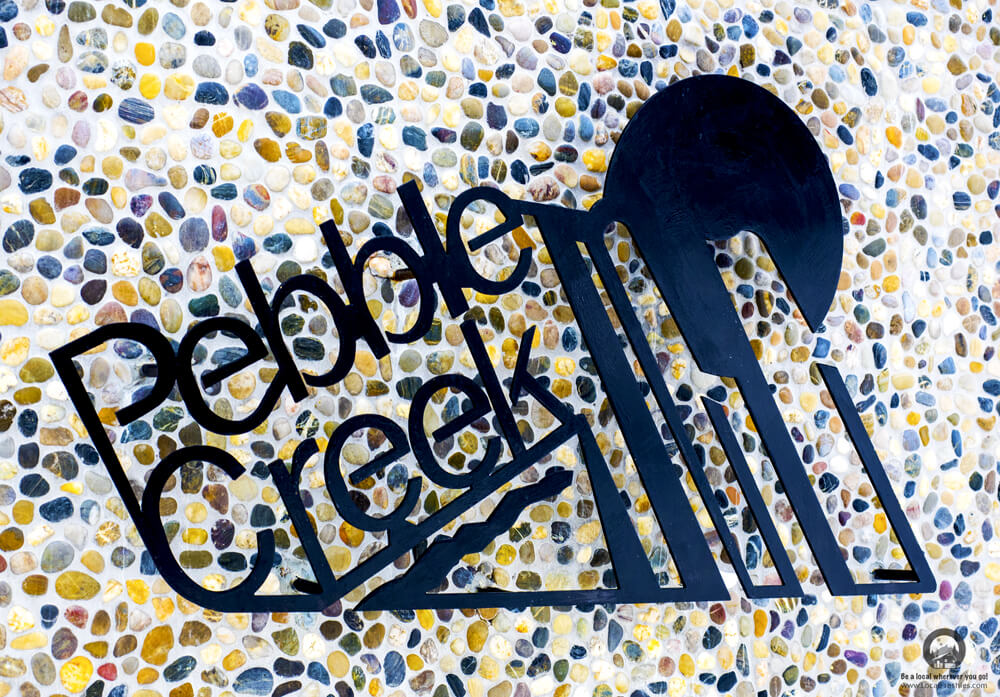 After a few laps on the outer section of the mountain, we decide to check out some of the steeper stuff. We head riders right this time and drop into the Rock. Named after the resorts’ nickname, it’s steep yet soft but the slope is no joke. Filled with boulders and cliffs, you have to pick your line and choose each turn to make sure you don’t end up tumbling down one of them. What a rush! We continue to hit the trails until our legs call “Mercy!”

Rock Bottom Saloon – The Cheers of a Ski Town

It’s beer o’clock time. Even though the Saloon is closed during the week, they open it up for us. After a few minutes, some of the employees getting off of work join the crew over a cold one. The watering hole is the stuff of legends, like a pair of comfortable gym shoes that you never want to throw out. Worn in stools, TVs showing old ski flicks like “The Blizzard of Ahhs”, great conversation and of course, affordable beers like $2 Montuckys.

Pebble’s Employees Are Passionate About Their Resort 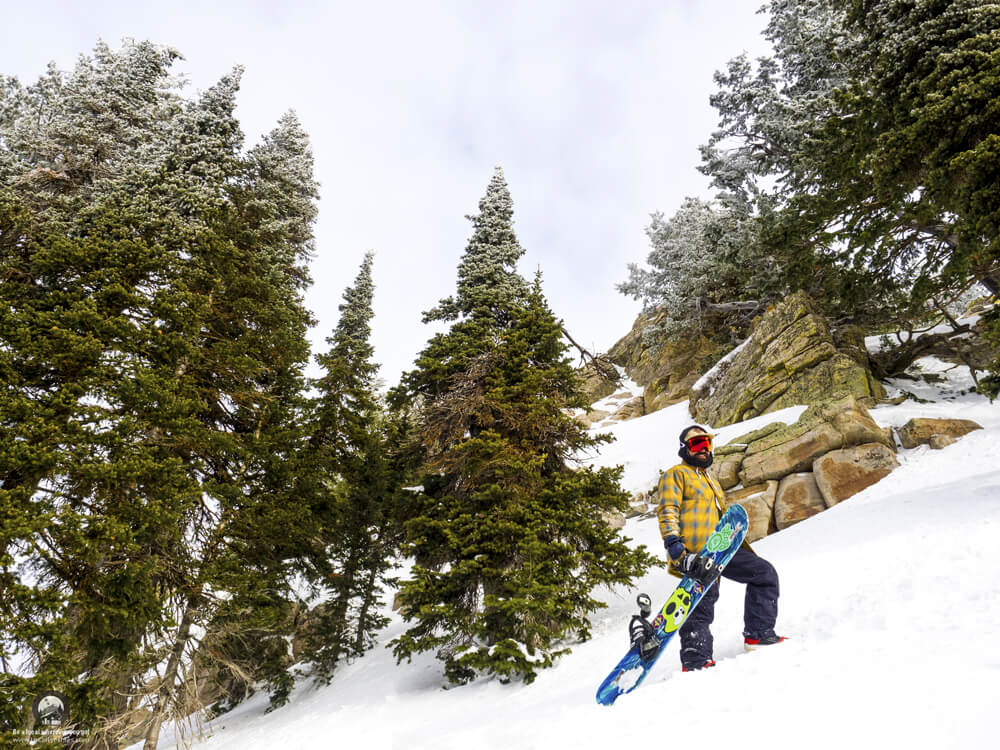 Mike Rodriguez deep in his element Image by: Local Freshies

We take a moment to learn a bit more about our awesome hosts. Even though this is Mary’s last year, you can tell this is less of a job and more a calling. Her passion for Pebble and the community can be seen in the beginner’s area she helped create called the Aspens. Looking forward to seeing more of her family, she’s handing the torch over to Mike Dixon. Mike grew up shredding the mountain and you can tell by the way he hits everything and anything that’s put in front of him just like the kids.

Mike Rodriguez on the other hand, grew up in Sacramento but learned to ride up at Pebble Creek. It was on one of his many road trips up to Idaho that he visited Pebble Creek and that’s all it took. It was love at first sight. Now the lift operations manager, he makes sure that everything keeps running. After a few brews, we decided to call it a day and head home.

Article brought to you by:

Posted in » Skiing and Winter Recreation