As a kid, my family spent every summer exploring North America. Do you know which places I remember the most from those vacations? Disney World? Las Vegas? Nope. It was our road trips to Alaska and Newfoundland. Why? Because they weren’t easy to get to. It was a badge of honor to tell my friends that we DROVE THOUSANDS of miles to visit these destinations. Now years later, that sense of adventure is still deep in my soul. Sure, you can visit popular resorts with millions of other people. But why? Instead… why not experience somewhere that most will never go? Pebble Creek Ski Area is a great example of this.

Yesterday’s adventure was a great warm-up day on Pebble Creek’s slopes and just like our visit to Pomerelle, our second day here at “The Rock” was dedicated to exploring a bit of the backcountry around the resort. Before we headed up though, we decided to check out Oliver’s for breakfast. 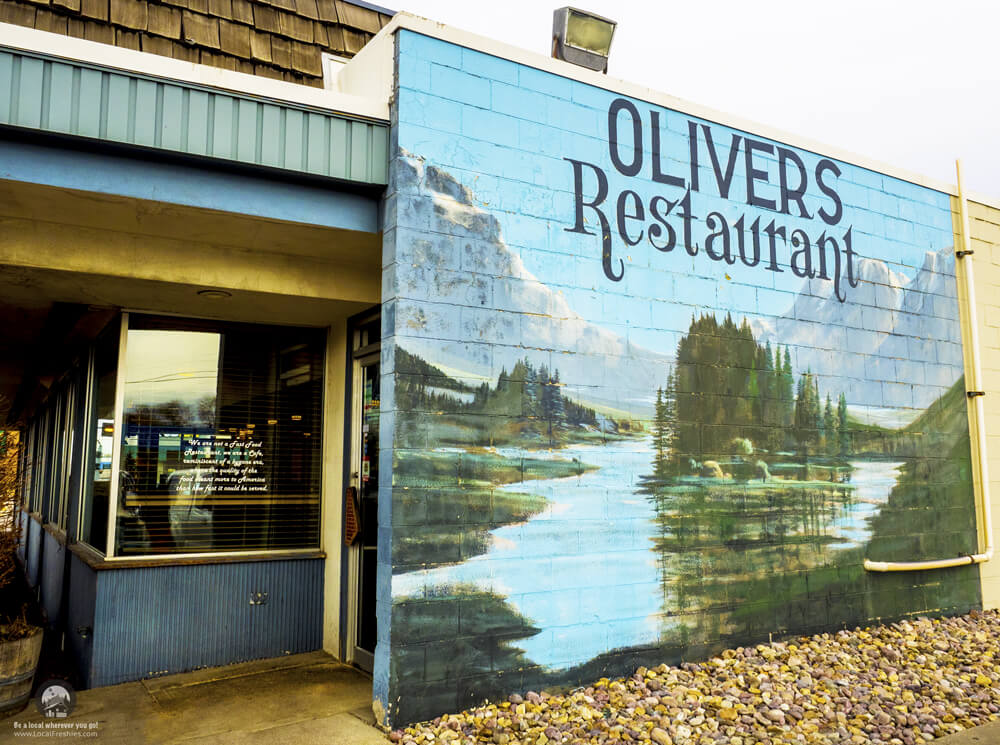 The mural on the side of Oliver’s Restaurant – Image by: Local Freshies

A classic well-maintained diner, this place takes you back to the late 60’s. We ordered a Scramwich and a Breakfast Bowl. The Scramwich is a scrambled egg sandwich made up of anything you could think of including the kitchen sink. The light veggie filled delight was satisfying but not to the point you feel sluggish. For those hankering a biscuits and gravy flavor but don’t want to feel like a lead weight is in your stomach, the Breakfast Bowl is the perfect choice. It has just the right amount of gravy for the full flavor without making anything soggy. All fueled up, it was time to head up to Pebble. 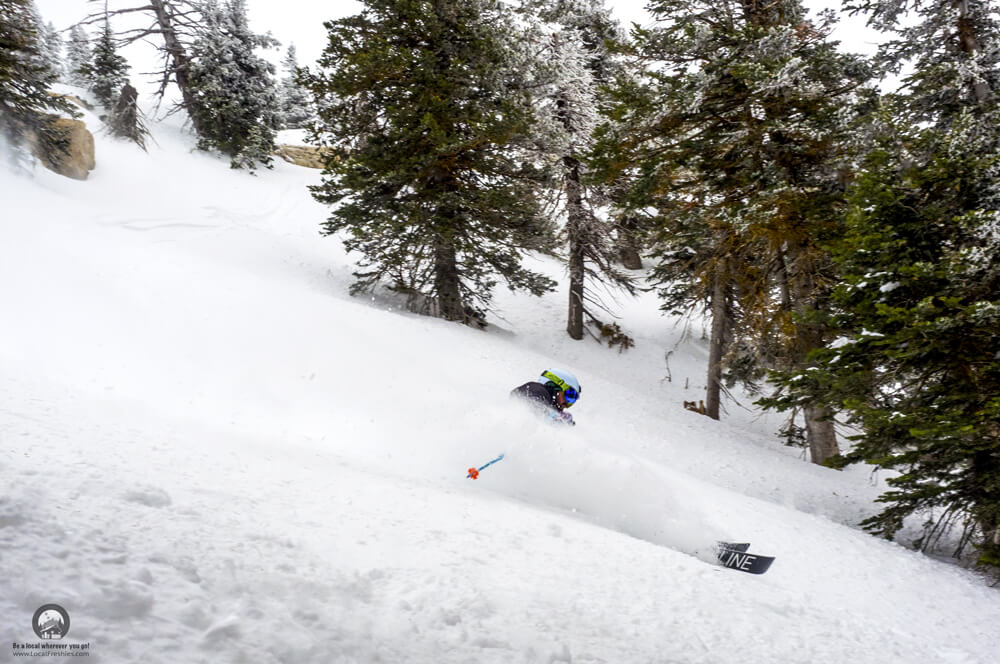 With no new snow and a full day of exploring ahead of us, we decided to go straight into the backcountry with Mike Rodriguez and his co-worker Chad Mehmel. Based on the locals’ “snowledge”, the best zone to hit today would be Skyline Peak. So, we hopped onto the first lift and headed right for the top. From there, we unstrapped and hiked out of the ski area. Bootpacking our way up, Mike pointed out the massive amounts of terrain you could walk/skin to just outside of the area. It reminded me of the easily accessible Mt. Baker backcountry without the competition.

After about an hour’s worth of hoofing it, we made it to the top. Taking a quick break, we scoped out the area and our jaws dropped. Here was a pristine line filled with knee-deep powder weeks after a major storm! If this was accessible in Lake Tahoe, it would’ve be tracked out within hours. Instead, we had it all to ourselves. Ratcheting in, Mike dropped in first. 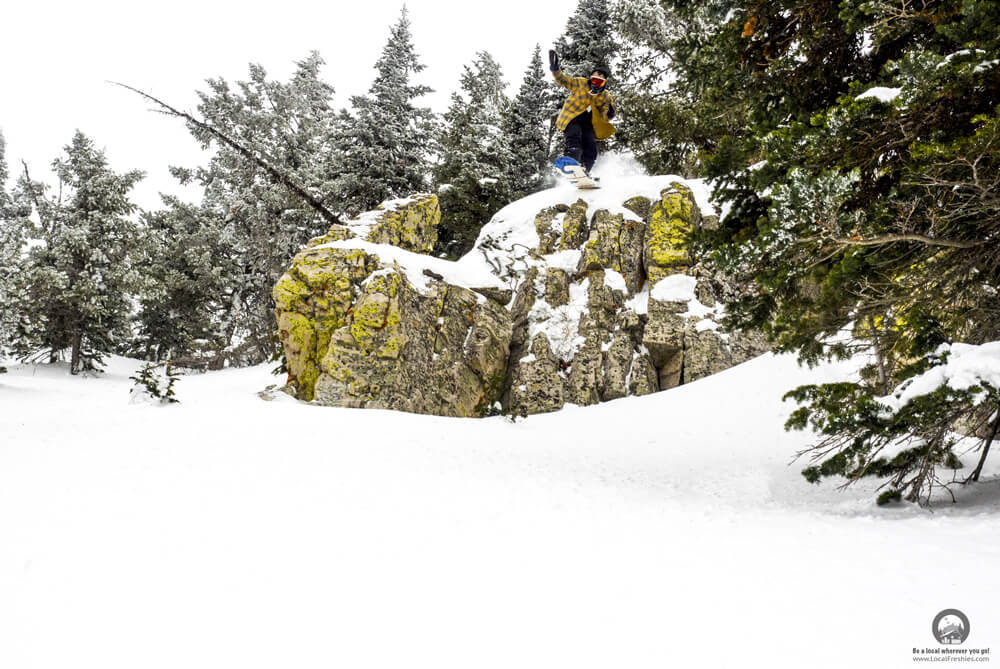 Mike Rodriguez in his playground – Image by: Local Freshie

He pointed it towards a snow-covered rock outcropping just in front of us and surfed it like a wave. He made a massive slash on it like a pro-surfer riding Mavericks. A large plume of snow flew over the rocks as he gracefully rode it out. You could tell this was his playground as he ollied off a fifteen-foot cliff followed by a few huge turns down a virgin slope. He stopped about mid-way and turned around to watch us. Jaime and I followed, taking a few cautious turns unsure of the snow conditions. As the trees opened up to the large face, we decided to let ‘er rip. Even though it hadn’t snowed for a while, the conditions were off the hook. At the bottom we looked up in total shock. “Not bad huh?”, Mike said. “That was awesome!”

Kidz Got Skillz With The French Fries 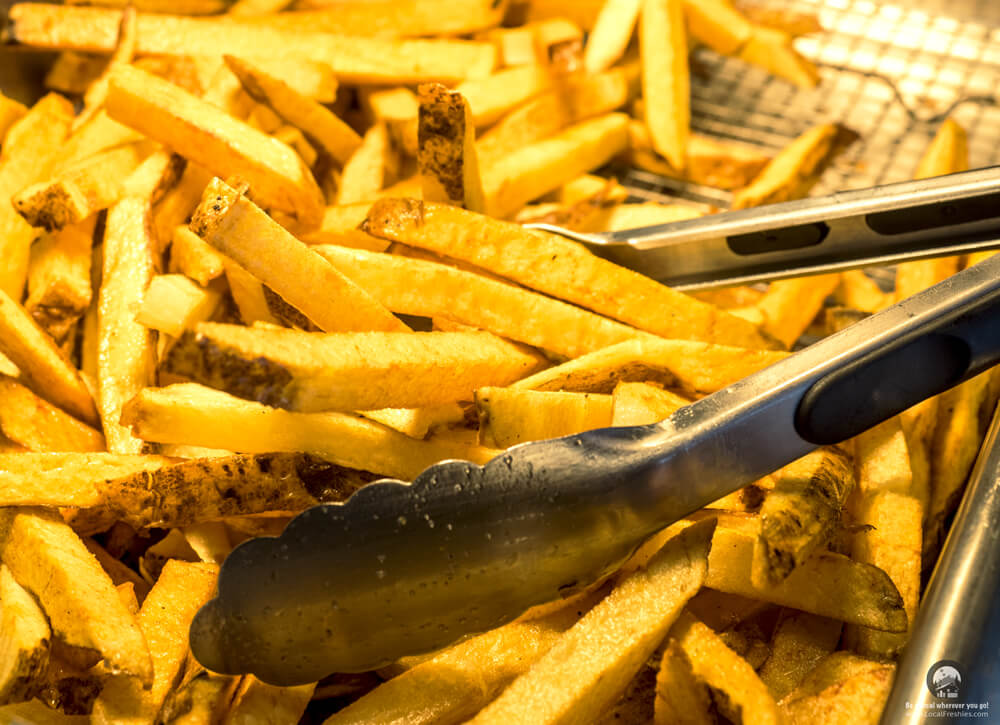 We spent a bit more time exploring the area, but time passed quickly and we were meeting up with Mike Dixon and Mary Reichman for lunch to try their infamous fries. Why are they legendary? It’s for a few reasons:

As I watched the kids in front of me get fries, you can tell this was serious business. They stacked them horizontally in a way that maximized their fry load. As I looked at my stack and compared it to the kids’, I knew my professional fry-stacker license would be revoked.

A Side Of History With Lunch 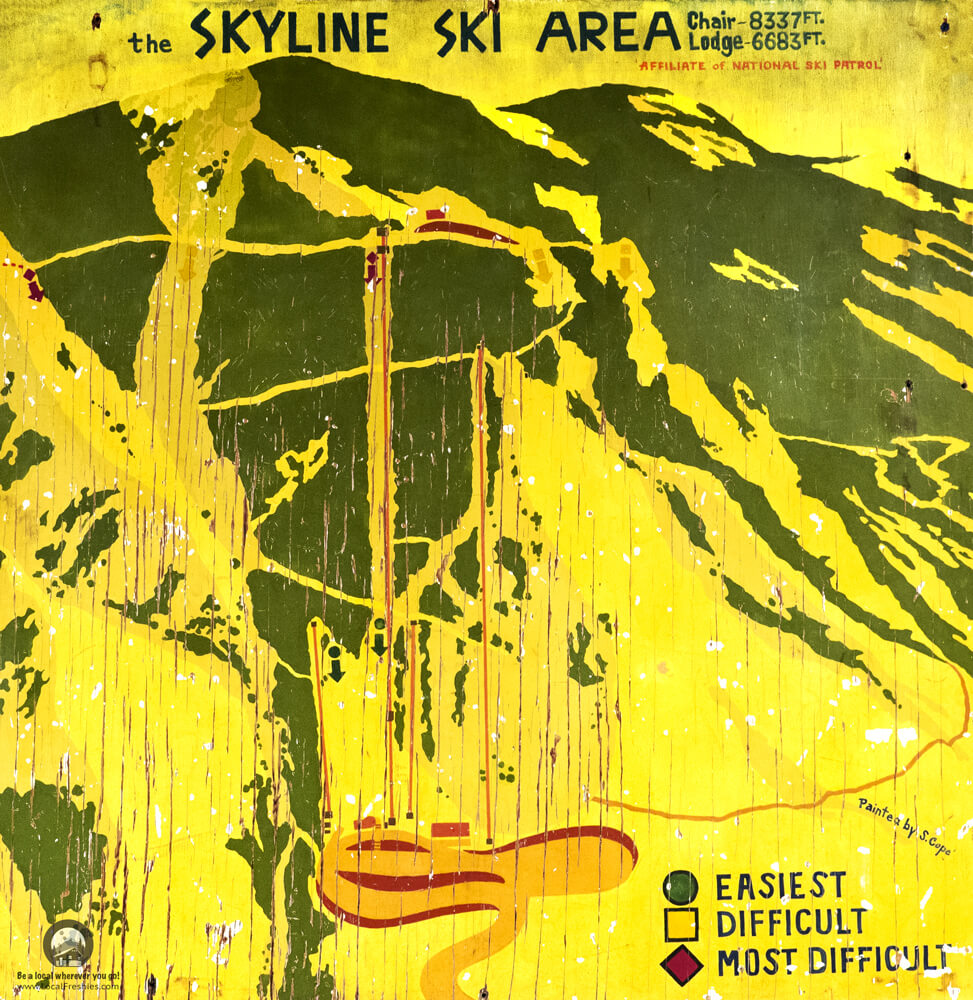 As we sat down with our meal, we delved into the history of Pebble Creek. Started in 1949 as Skyline Ski Area, it was a local’s haven for years to enjoy everything winter. Then in 1979, it was sold to a land company with bigger plans, re-naming it Pebble Creek. Named after the creek that runs on the backside of the mountain, the goal was to expand to this side with another lift. Over the first few years, they sold several private lots to speculators. Unfortunately, three years later the company went bankrupt. Reichman and her husband, John, were part of a group of ten investors who bought the ski area after this debacle. Though there were some hardships in those years, Mary helped re-build the image of the resort as a family-friendly community ski area. This difficult realignment helped to make the ski area financially solvent and on a positive path forward.

In September 2016, Pebble Creek was purchased again. This time it was by Shay Carl, a popular Internet celebrity from Pocatello. He brought in Mike Dixon to help with the transition since Mary’s scheduled retirement is after this winter. You can tell Mike is as passionate about having the resort succeed as Mary did. He grew up racing down these same slopes as a kid and even talks about how he used to get called in Mary’s office. Years later, he’s now going to be the one sitting in that chair dealing with the next generation of rippers.

So, I had to ask about the elephant in the room. Would they ever build the lift to the backside? No one really knows the answer to that question, but the honest likelihood of it is very low. Their niche is to serve the local community and if they did expand, the cost would transfer to their lift tickets and put them into a price range that wouldn’t make Pebble Creek affordable. Makes sense to me! But, if you’re an experienced backcountry skier/rider, you can still access the terrain (and maybe have it all to yourself like we did).

We spent the rest of the day shredding the slopes and finding a few more powder stashes until it was time to head to dinner. We’d heard great things about a small nondescript Italian eatery called Buddy’s and both Mikes said they’d join us. With a full crew, we headed over. Strolling into the establishment, we were seated quickly and followed our tour guides on what to order.

The Chick’s special at Buddy’s – Image by: Local Freshies

To start, we ordered a few Buddy’s Salads to share with the table and then I chose the Chick’s Special for dinner. As soon as the salads came out, I couldn’t believe how big they were. I now understood why we ordered them to share. Each bowl could easily feed four people. The salad was a dichotomy of flavors. It was somehow creamy, crunchy and moist all at the same time! Definitely something EVERYONE should try if you swing through town. The Chick’s special was a good choice too. A large open-faced sandwich covered in mozzarella cheese, marinara sauce, veggies and your choice of meat or additional veggies. I got it with ground sausage and it was tasty.

Article brought to you by:

Posted in » Food, Our Town, Skiing, and Winter Recreation